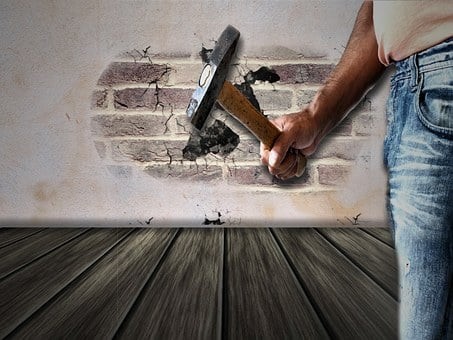 Asbestos is a group of six naturally occurring minerals that are soft, flexible, and heat resistant. Asbestos is a great insulator and was used in homes and buildings prior to the 1980s. Because asbestos was so flexible and could fit almost anywhere, it was used to insulate many parts of the home. Asbestos was used as the basic insulator as well as to insulate pipes, tiles, and even the ceiling. Asbestos was found throughout the home, and although it kept the houses and buildings warm, there was an underlying health concern that was not known at the time. Now, when homes are being renovated or torn down, there needs to be special caution for the asbestos demolition.

We now know that asbestos can cause cancer as well as other lung diseases because asbestos can float through the air and end up in the lungs of someone that is working on the house, but people may not know that they were exposed to asbestos for up to fifteen years after the exposure, so when is it time to consider asbestos demolition to prevent any health concerns?

One of the times to consider asbestos demolition is when you are removing or replacing a floor. Often, asbestos was used under the tile to insulate the floor and keep it warm when bare feet are walking on it. When a floor is ripped up, this can cause asbestos to be exposed and disturbed. It can be on the bottom of the tiles or between the tiles and the sub floor. When the tiles are popped up, the asbestos can float in the air and into the lungs of the person renovating. While tiling over the old tiles is considered an option, it still puts the health of people at risk if there is any type of exposure from cracked or damaged floors. This would be a time to consider asbestos demolition so you can ensure that residents are safe, both now and in the future.

When you have popcorn ceilings

Popcorn ceilings were common in the seventies and the eighties. This special effect made the ceilings look unique with their variety of textures and colors. However, under the popcorn roof, there was often asbestos to insulate the roof and keep the cold out of the home. It was common practice for new homeowners to want to remove the popcorn ceiling and paint it to make the home look fresh. This requires a lot of scraping, sanding, and then painting. During the process, asbestos could be exposed into the air and into the lungs of the painters or the family members. Many painters may wear a mask for smell or dust, but that is not enough protection for asbestos, and it will not help the other people that reside in the home. When changing the ceiling design, it is time to consider asbestos demolition.

Removing drywall or plaster is a common practice when renovating. There may be water damage from leaks or just broken walls. Asbestos could be behind the walls, and when they are removed, asbestos can then be freed to float in the air and into the lungs of the unexpected people in the home. It could be something even more simple, such as getting new art work and wanting to hang it in the living room, or even mounting a new television on the wall. When drilling through the drywall or the studs, asbestos dust may come out from behind the wall and into the air. If the home is built prior to the 1980s, asbestos demolition should be considered prior to even small renovations or changes in the home for the health of everyone in it.

When a heater or HVAC system needs to be upgraded or a hot water line needs to be replaced, remember that asbestos was often used to insulate the pipes in the homes. When cutting pipe or removing pipes from the home, you may allow asbestos to come into the home through the air and into the lungs of the people in the home. Asbestos demolition needs to be considered when upgrading any old pipes or water tanks in the home.

There are other times to consider asbestos demolition as well, such as repairing old attics that may be allowing asbestos to seep through the cracks or chips in the ceiling or walls. Older attics need to be cleaned properly from asbestos, and new, modern insulation should be used for the health of everyone. Even in the garage, asbestos was used in brakes of cars in the sixties and seventies. When changing brake drums of old cars, it should be done with caution to avoid possible asbestos getting into the garage.

Knowing today that asbestos can cause many health issues, including lung troubles, asbestos demolition should be completed by professionals.

« How Can I Make My Wood Flooring Stay Looking Great? What a Home Remodeling Contractor Can Do for You? »